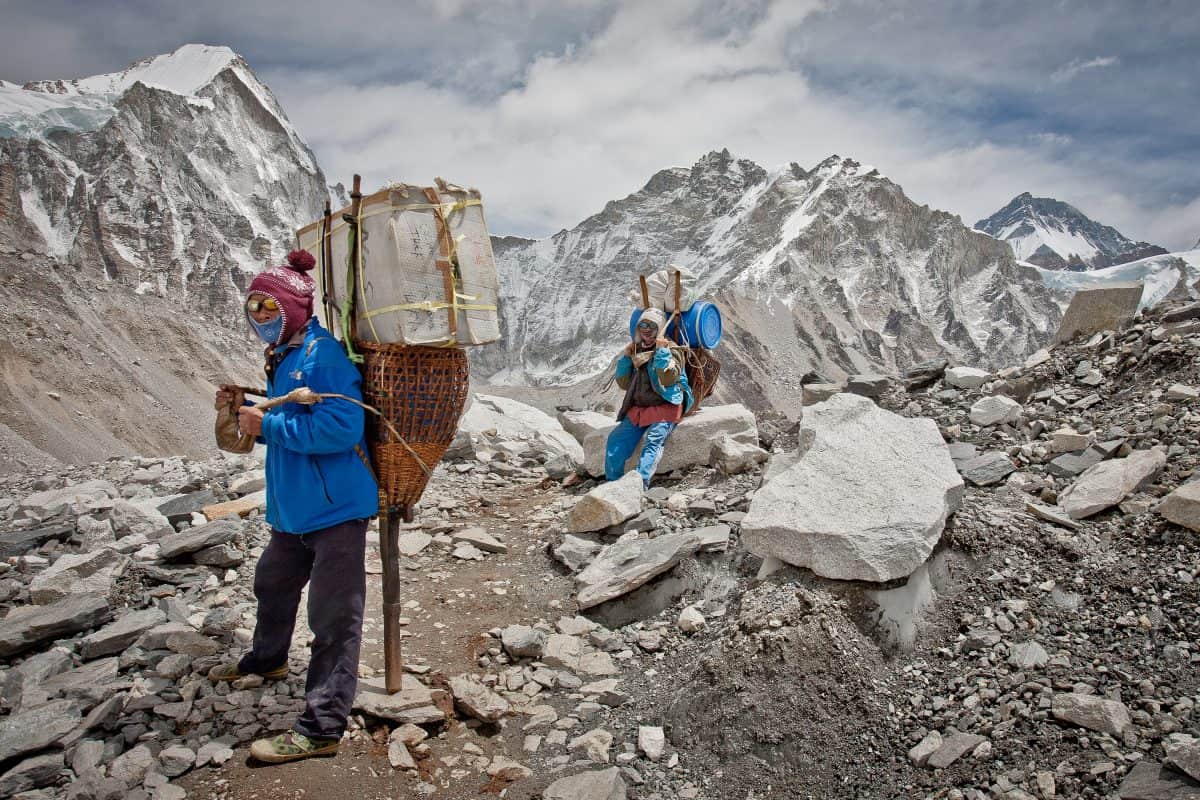 Choosing equipment and clothing for an Everest Base Camp trek isn’t particularly easy. You will be in the mountains for a least two weeks and the temperature can vary widely. It can be swelteringly hot, it might snow and rain is likely. You will be limited by weight and you won’t be able to wash any of it very easily. It’s therefore best to pick outdoor clothing that is quick drying, light, versatile and will combine and layer with other clothing when it gets colder at higher altitudes. In early 2012 I walked the classic Mount Everest base camp trek and stayed a week at base camp hosted by Jagged Globe. I photographed all the key individuals involved in climbing Mount Everest, porters, cooks, Sherpas, Kenton Cool and Conrad Anker amongst others. The photographs can be viewed here – Everest Base Camp Portraits and the clothing I used is listed below. I have had the great privilege of having been supported by Rab for a number of years and consequently the Everest Base Camp Clothing I use is all made by Rab. This is an update of an article I wrote for the Rab blog and some of the kit I used in 2012 has been updated and some of the names have changed so I have rewritten accordingly. In spring 2016 I led a Mera and Island Peak trek which has a similar descent back to Namche Bazzar and Lukla and I used similar kit. Rab The Aeon Long Sleeve Tee These base layer tops are brilliant. Soft and silky to wear, great on their own when its hot, great layered under other clothing when it’s cold, lovely to wear inside a sleeping bag and they don’t smell too badly if you don’t wash them much (however they do dry very quickly when you do end up washing them). I have used these in Borneo Jungles, Ice climbing in Norway, Italy and Chamonix, for Scottish winter mountaineering, in American deserts and summiting Kilimanjaro and Mera Peak. I don’t go anywhere without one. Merino +™ 160 Hoody Merino wool has been popular for a few years now and this Rab long sleeve top is a modern update. 65% merino wool combined with 35% recycled polyester. The great thing about these tops is that they can be used as both a base layer and mid layer over a Aeon Tee depending upon the conditions. The hood adds to the versatility. Rab Sawtooth Pants I decided that I was only going to take one pair of trousers up to base camp so I had to be quite choosy. After years of trying various fabrics I have concluded that for hiking pants, a thin stretchy soft shell fabric works best in a variety of conditions. They are very breathable, dry extremely quickly and layer well with thermal underwear when things start to get colder. Choose a dark colour to mask the dirt and dust. Rab Xenon X Jacket On treks I tend to use jackets with synthetic fill instead of fleece and soft shell jackets as a mid layer. They are lighter, warmer, more wind proof, dry quicker and layer better. Again this jacket has been with me everywhere over the last couple of years. Put it on over or under the Rab Infinity own jacket when it gets really cold. Rab Infinity Endurance Down Jacket As you get higher it’s gonna get colder and a good quality down jacket will help make those chilly evenings a lot more bearable. I chose the Infinity for its light weight but there are many alternatives including the Rab Neutrino or the new Rab Positron jacket which is designed to be used for mountain and expedition use up to 6000m. Waterproofs Jacket and trousers. Unfortunately it can rain quite a lot in the Khumbu region of Nepal so a good quality set of hard shell waterproofs is essential. The Rab Latok jacket and pants aren’t the lightest waterproofs available but are utterly bomb proof will give plenty of protection if the weather turns bad. Do remember that you will be trekking at over 5,000m in the highest mountain range in the world. Rab Expedition 1000 Sleeping Bag Choosing the right sleeping bag is always difficult. Make the wrong decision and those cold, cold mountain nights really drag. Ideally you will need a four season sleeping bag, preferably filled with down which is warmer for the weight and packs down smaller. You may find a four season bag a tad too warm lower down but I would rather be too warm early on than too cold higher up. And of course temperates due vary season to season and year to year. The 2016 spring season  in Nepal was unusually cold. The Rab Expedition sleeping bags are built on the roomy side to accommodate the wearing of high altitude down clothing inside the bag. You won’t actually be climbing to the summit, so you won’t need to do this, but this design does make the bag a bit easier to move around in and the extra internal space may suit larger trekkers. A disadvantage of this extra room is that the bag does take a little longer to warm up. A good alternative would be a Rab Andes 1000. Boots I wore running shoes all the way to base camp but it was very dry and I did carry boots just in case. If it had been wet or snowy I would have worn my hiking boots. Lightweight synthetic or leather walking boots are suitable. Gloves and hats I carried two sets of gloves, a thin pair of Rab Phantom Grips and a warmer pair of Rab Latok gloves for higher up or bad weather. You will need a sun cap or hat for the possibility of blistering sun. I also carried and used a beanie and a buff can be extremely useful for a number of purposes. Other Equipment You will need a couple of water bottles, wide mouthed 1L Nalgene or Hunersdorff are best and you can fill them with hot water at night and use them as hot water bottles. High altitude sunglasses are essential. If you are trekking with an organised group you need a rucksack to carry personal belongings during the day. 30-40L is good. If you are independent and carrying all your own gear you will obviously need something bigger. Blue Ice and Lowe Alpine are both good reliable brands. Alex For more information on clothing and equipment for mountaineering read Alex’s blog on clothing and equipment for Scottish winter walking and mountaineering/ Beyond the Edge Ltd is based in Sheffield two hours by train from London and within easy travelling distance from Manchester, Leeds, Nottingham and other Northern towns and cities. We are one of the UKs most experienced providers of climbing, walking, scrambling, mountaineering and navigation training courses.  Most of our courses are run in the nearby Peak District National Park which has some of the finest climbing, bouldering, walking and hiking in the world.

Clothing and Equipment For Scottish Winter Walking and Mountaineering